Every year or two, several United Methodist Church agencies organize and sponsor a 10-day Wesley pilgrimage to England that’s open to both clergy and laity. The 2016 pilgrimage took place from July 11-21, and three Minnesota United Methodist clergy—Revs. Dan Foster, Dianne Ciesluk, and Greg Ciesluk—were among the participants. Pilgrims walked in the footsteps of John and Charles Wesley; immersed themselves in the Wesleys' Christ-centered leadership; reflected in small groups; and made connections between Wesleyan heritage and missional leadership for today. Upon returning from the trip, Foster reflected on what he learned and how it relates to the work United Methodists are called to do today.

Pilgrimage, largely, is an event we participate in, but it’s also a way of life that invites us to see God active in every aspect of life. We intentionally step away from everyday life and ponder how God is active in life. The hope is that we can see God in the breaking of our daily routine, from our normal spaces. Once God is seen outside of our daily routine, perhaps we are more capable of seeing God’s activity in our daily life. Pilgrimage then is perhaps a way to live life every day, not just when we leave our normal spaces.

In July, I was able to go on pilgrimage to England thanks to a scholarship from the General Commission on Archives and History of the United Methodist Church. The intent of this pilgrimage was to visit and reflect upon the historical sites of the Wesley family and consider the impact the Methodist movement could have in today’s world.

Many of the pilgrims were hoping to gain insight into the past so that we can help to guide the future of the United Methodist Church.

John and Charles Wesley were greatly formed by the past. Not only did they receive a great education from their mother, Susanna—who taught them much about the strength and ability of women in leadership; they were active in daily worship, which allowed them to extend God’s work in the world. John also looked to the Greek and Latin church fathers to inform his faith. This searching in the theology and practices of the early church led to his work, while still a student at Oxford, with those who would be considered outsiders, poor even. 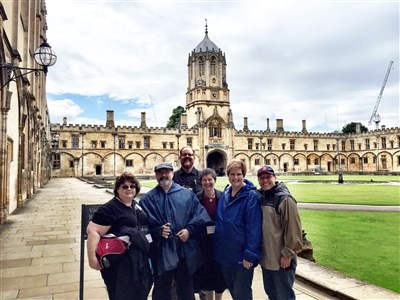 John Wesley became adept at crossing boundaries—he preached to and was in relationship with those who were very poor and those who were very wealthy. John seemed to be able to bring various groups together within the class structure formed when discerning ways to repay debt to be taken on for financing the building of various preaching houses. This allowed for a common mission within the movement that looked beyond boundaries created by humanity and fully embraced every person as a child and heir of God.

The cultural awareness needed for this work is needed even more so today. As United Methodists, we are called to work with all people in our community. As Christians, we know that our own salvation is tied up in the salvation of others, for none of us can be free while our sisters and brothers in Christ perish. This is why the Wesley brothers worked on the abolition of slavery and were willing to continue dialogue with others, even those with whom they disagreed. This is community building—reaching out across and dismantling barriers instead of building barriers.

No longer are we focused only upon our congregation or our church, but instead upon the whole of the community while in relationship with one another and with God.

As a pastor in The United Methodist Church, this calls me not only to work with all in the community to which I have been appointed, but also to work with others in the denomination with whom I may disagree—not out of some false idol of unity, but out of the reality that Christ has brought us together in relationship with one another.

As United Methodists, we have relationships that span the world, within and outside of the Wesleyan tradition. Within these relationships, our salvation is tied up. We are called to be in pilgrimage daily, looking for God’s activity in our lives, in the life of our churches, and in the communities we serve.