We read the Advent story backwards. We already know the end of the story. We know that this Jesus is the Son of God. We know about his ministry, his death and resurrection, and the explosion of the early church. It makes it seem all so much more probable. Of course God would do such thing, and Mary and Joseph must have been so honored to be chosen by God to bear God’s son into the world. But reading it backwards, I don’t know if we have the appreciation for how unexpected and disruptive this act of God entering human history in this way was.

If we read it forward, not knowing what it all means, then we need to start by imagining a people who have been chosen by God to be in a particular covenantal relationship, and the sign of this covenant was land. They saw that promise come true as kings such as David and Solomon ruled over Israel and Judah. And then a split. And then being conquered. And then exile. And finally occupation by Rome. For centuries, they have been waiting to be restored to the way it was. There is this hope of a messiah who would rescue God’s people and return them to the being the rulers of their own kingdom. That is what all those scriptures in that we read in Isaiah in Advent speak of.

It feels a bit like where we are living we are today. We may not be an occupied people, but as this pandemic stretches on, I hear longings of going back to normal, to what was. A common desire in the human psyche is the good old days, however we remember them, even if it turns out they were not so good for everyone.

In the midst of all this hoping and waiting, God does act. But it is not to bring back the good old days, to go back to the way it was. And God does this through some pretty unlikely characters. God comes to an ordinary young girl in the form of an angel, and says: Mary, you are going to have a baby. And, of course, her answer is: How can this be, and what does this all mean? She has no idea how her life is going to change. And God speaks to Joseph in a dream: Take Mary as your wife even though this is not the circumstance you thought it would be. And God chooses to take the form of a vulnerable child, a humble carpenter’s son, an itinerant preacher, and one who will suffer and die. It does not make sense. It is a miracle that they said yes, especially not knowing what was to come next. And maybe that was how they could say yes. Simply trusting this moment and that God was in it somehow. 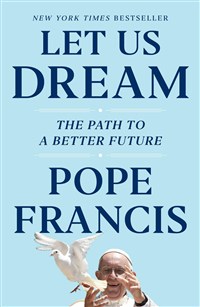 At the end of Pope Francis’ book, “Let Us Dream,” he says this is a time for pilgrimages where we are called to decenter and transcend. He says: “See where you are centered, and decenter yourself. The task is to open doors and windows, and move out beyond…a crisis forces you to move, but one can move without going anywhere. In lockdown many of us left the house or apartment to shop for essentials or walk around the block to stretch our legs. But then we went back to where and what we were before, like a tourist who goes to the sea or the mountains for a week of relaxation but then returns to her suffocating routine. She has moved, but sideways, only to come back to where she started. I prefer the contrasting image of the pilgrim, who is one who decenters and so can transcend. She goes out from herself, opens herself to a new horizon, and when she comes home she is no longer the same, and so her home won’t be the same. This is the time for pilgrimages.”

The story of Advent is one of pilgrimage. Mary and Joseph leave behind their expectations for their life to say yes, and then have to leave home because of the rules of Rome and end up giving birth in a cave behind an inn because that was the only place they could find. Shepherds out in the field have an angel show up and say something is happening that you need to go see, and they leave their job to go and do it! And wise ones from a different country and culture see a star and know this star means something, so they, too, go on a journey to follow it. And they return home a different way, not the same for what they have seen and heard.

You read the story forward, and you have no idea what they are risking in saying yes, how it will change their life, how it will turn out. But they are willing to decenter from their usual expectations, to pay attention to what might be movements of the Spirit, and to go with it. Through their experience, they transcend, and through them the world transcends.

So, my friends, our world has been a bit undone. Perhaps it feels like we are exile and we have been praying a long time for God to restore us. What if God is indeed hearing our prayer, but God’s response is not what we expect and is instead leading us to a new place? It gives a whole new meaning to Advent, does it not? This is the time for pilgrimages.

Rev. Cindy Gregorson is director of ministries and clergy assistant to the bishop for the Minnesota Annual Conference of the United Methodist Church.