“After a little while, those standing nearby came up to Peter.
‘Surely you are one of them,’ they said, ‘for your accent gives you away.’”
– Matthew 26:73

Since the Southern Prairie District had the most appointment changes this year, I thought the topic of culture shock seemed particularly relevant.

A quick Google definition of “culture shock” is “the feeling of disorientation experienced by someone who is suddenly subjected to an unfamiliar culture, way of life, or set of attitudes.” We normally think of culture shock when we talk about transition into foreign lands, probably mostly because the cultures in those lands seem more obviously different than our own.

However, I believe culture shock happens to us even when our moves are less overtly unlike the culture we came from. In fact, sometimes I wonder if culture shock might take a greater toll on us when we move just a few hours down the road because it catches us off guard when it hits us.

What you may not know is that culture shock is so common that it is measurable—as in, you can chart it! In fact, if you do a Google image search of the phrase “culture shock chart,” you can see very basic and quite detailed charts regarding the pattern of culture shock. (I’ve done it for you here). 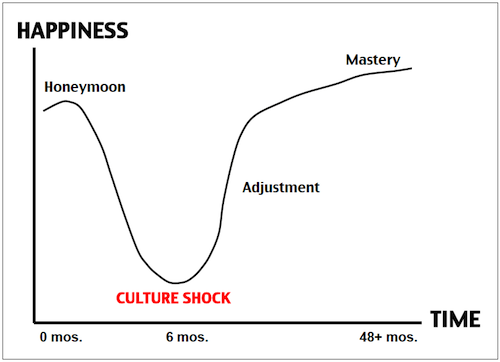 Given that most new United Methodist pastor appointments start on July 1, and given the road to culture shock hits hard between two and eight months, if my calculations are correct, many clergy might be experiencing culture shock right about now.

This blog post is just to encourage you and to let you know that your feelings of despair, hostility, loneliness, anger, bitterness, and “Did I make the right decision to come here?”—Well, they are right on time! (It could be that some of you aren’t there yet. If that’s the case, brace yourself—it’s coming!).

Allow me to take a Wesleyan approach: I believe the process of cultural adaptation is a means of grace and thereby moves us forward in our own sanctification. However, like most spiritual disciplines, the sanctifying grace found here only comes when we meet it with “staying power.” This is not a post encouraging you to “suck it up” or “stop whining” but rather instead to simply ask you to add endurance and trust to your list of feelings. Be angry, be lonely, be frustrated, but resolve to endure in spite of that. God has so much more in store for you on the other side.

Look at the chart above—yes, it takes a big dip, but on the other side, growth happens. You can’t see it now, but there will be a time, if you endure, when you will love the people who surround you and be glad to be counted among them. And that is when incredible ministry can begin to happen.

Jesus, in the incarnation, became bi-cultural. He spoke the language of a kingdom culture with a learned Galilean accent. In the midst of your shock, God is shaping you for incredible adaptability to be as a cross-cultural incarnational missionary and ambassador of the kingdom.