Artist, educator, and speaker Joe Davis and singer Rachel Kurtz graced us with their gifts in the opening session of Annual Conference on May 24. Here's a bit about each of them.

His work has been featured on BET, CNN, and VH1. He is the founder and director of multimedia production company The New Renaissance, the frontman of emerging soul funk band The Poetic Diaspora, co-creator of JUSTmove, racial justice education through art, and author of We Rise Higher: Poems and Prayers for Graduates.

He has keynoted, facilitated conversation, and served as teaching artist at hundreds of high schools and universities including programs in New York, Boston, and most recently as the artist-in-residence at Luther Seminary in St. Paul, where he earned a master's degree in Theology of the Arts. 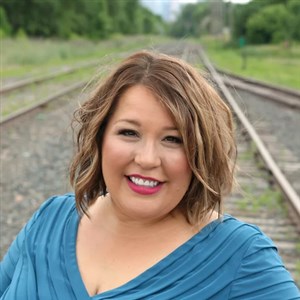 Rachel Kurtz has been touring and singing for almost 20 years. She speaks frankly about love, God, parenting, heartbreak and her infectious laugh is peppered throughout her concerts. Her songs are rife with emotion and can make you get up and dance. Whether she is singing in a bar or church, her voice can cut through the noise and gives the listener a place to rest. In 2018, she released an album called “Love, Rachel Kurtz.”

Following an unconventional career path, Kurtz has found acclaim and a national audience of thousands due to her appearances at a series of community service events held in sports arenas across the country. Raising awareness for world hunger, hurricane relief, and multi-cultural reconciliation, Kurtz’s powerhouse voice and heartfelt performances have been electrifying crowds in concert venues from coast to coast.